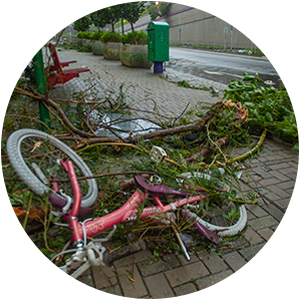 In the summer of 2021 a massive flood event across a huge area of Europe resulted in around 250 deaths and as much as 10 billion euros of damage. Lessons must be learned.

A sense of the scale

The flood event of July 2021 was the most deadly natural disaster since the North Sea floods of 1962, when 315 people died in Hamburg and 60,000 houses were destroyed.

A huge area was affected by extreme weather conditions at this time, including parts of Austria, Belgium, the Czech Republic, Croatia, France, Germany, Italy, Luxembourg, the Netherlands, Romania, Switzerland and the UK.

The majority of deaths occurred in West Germany, where over 200 people lost their lives and 749 were injured. There were significant disruptions of power supplies, railway lines and tens of thousands of homes were flooded and major mudslides occurred in Erftstadt-Blessem.

One of the worst affected areas was the Ahr valley in the county of Ahrweiler, in the state of Rhineland-Palatinate. In the adjacent state of North Rhine Westphalia the Volme river burst its banks and the city of Hagen declared a state of emergency on 14 July.

In Germany and Belgium alone damage worth 5.5 billion and 350 million euros respectively has been estimated.

Getting a measure of it

The meteorological cause of the flooding was a slow-moving low pressure system, named ‘Bernd’.

From 12 to 15 July heavy rain fell over the UK, France, Germany, the Netherlands, Belgium and Luxembourg. Bernd moved east from France over west Germany and then stalled for two days.

Records of rainfall were broken by a large margin in affected areas, for instance 154 mm in 24hrs, where 95 mm had been the previous record. Some areas received a month’s average rainfall in a single day. At the time the weather system struck, soil conditions were already wetter than usual which reduced the rate at which rainfall could be absorbed into the ground (the infiltration capacity).

One rainfall assessment estimated that Bernd was a 300 to 1000-year storm event, with the flows for the Ahr river likely to occur once in 500 years.

Previous record floods predated the introduction of hydrograph records in 1947, but the Ahr valley flood event is in the top three.

The 2021 World Weather Attribution study of the rainfall used a high-resolution climate model to attribute an increased likelihood of occurrence of between 1.2 and nine times due to the change in climate that has already occurred.

Why so many deaths?

Four days before the rain began to fall they sent over 25 warnings to public authorities indicating that the Rhine and Meuse river basins would have extreme rainfall and the potential floods were looking increasingly severe.

German government officials relayed the risk of flooding to regional authorities responsible for warning the public.

However, warnings were not effective at regional level.

Regional authorities varied significantly in their response. Some didn’t adequately inform the public that flooding was extremely likely and although flood risks were communicated, anticipated flood water levels were not.

Flood water levels at the Ahrweiler gauging station are estimated to have reached seven to eight metres above normal (instruments were destroyed during the flood event). Previous recorded flood gauging levels were in the order of 3.5 metres.

Water levels in the Ahr valley also started rising fast in the middle of the night (around 1.00 am). People were in bed; not necessarily listening to radio stations or reading their SMS messages.

People were told too late to evacuate or in some cases not at all.

Residents found out about the severity of floods by watching the water rise in their streets. This was described as characteristic of a country with limited communication networks not a highly developed nation such as Germany.

Lack of communication included the limited take-up of Germany’s flood-warning app, with only 10 million users out of the whole German population.

Lack of public awareness and preparedness was a key cause of the high number of deaths. So many were still in their houses and vehicles when the flooding occurred.

The details of how people lost their lives are still not clear, but many bodies were recovered from basements during rescue operations. In such events people typically attempt to bring out possessions or pump flood water out of basements. Without adequate guidance, people are not aware how to respond safely, including avoiding walking through very deep flood water.

Fatalities have also been attributed to the vulnerability of the population; the over-65 age group is growing in Germany and in the Wallonia region of Belgium.

In Politico, 2021, Karl Mathiesen, Joshua Posaner and Laurenz Gehrke suggested that the authorities responsible for managing the Lake Eupen reservoir in the Meuse river basin in Belgium made the flooding worse than was necessary.

Other reservoirs in the area were emptied the week before the flooding occurred, but Lake Eupen was not. Tragically the authorities’ belief there was sufficient storage capacity in Lake Eupen for the incoming flood flows proved wrong and communities along the River Vesdre suffered major flood impacts, some without warning.

Well-informed public preparedness, diverse communication methods for flood warnings and consistent approaches to emergency response are all essential to reduce the impact of natural disasters and save lives.

If flood warning and management structures differ in different European countries, responses to the EFAS system will also differ.