Successful site development is dependent on drainage. Step by step, a number of things must be borne in mind. 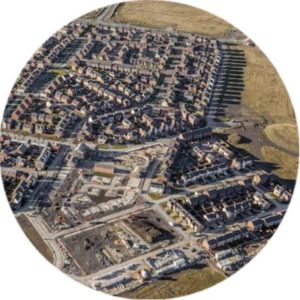 Identifying the discharge points for both foul and surface water leaving a site is essential in a planning application. Sites should be scoped out as early as possible to identify nearby watercourses and public sewers.

The planning authority needs to know that clear arrangements are in place to manage surface water, maintaining surface water runoff and water quality. Discharge points with adequate capacity and a suitable receiving body are key to this, and identifying them means that landowner consent can also be established early on, which helps streamline the planning process.

Lead Local Flood Authorities (LLFAs) have a key role. Since April 2015 Local Planning Authorities have had to consult LLFAs on all major applications, including agreeing discharge points.

The LLFAs are also in charge of giving consent to works on ordinary watercourses, which often play a key role in offsite drainage.

Contact the LLFA and local authority early on to find out what evidence they need to show a site can be appropriately drained.

These are the three options to consider for disposal of surface water runoff, in order of preference.

Even using the above sequential approach, problems can still arise when an impermeable or steep development site does not permit infiltration and is also far away from significant watercourses and public sewers.

Here more detailed site investigation is often required. You may need to investigate the outfall of minor watercourses, for example ditches on site, to identify how they drain to the local drainage network.

As ditches are often small, they are unlikely to be shown on maps. They are also difficult to trace using satellite imagery. You may need to commission on-site survey work to establish drainage paths.

If the ditches do not drain directly to local watercourses, you need to review the location and outfalls of connecting culverts/pipes. These are rarely shown in sewer undertaker maps, so you will need detailed site investigations involving the use of a sonde or a chemical flow tracer to locate their outfalls.

Rights and permissions to discharge into watercourses

The Land Drainage Act 1991 defines a watercourse as any channel through which water flows. It can be open or enclosed underground as a culvert or a sewer which takes land drainage flows.

If a section of watercourse passes through your development area you become a riparian owner and are responsible for that section. You must maintain the watercourse in such a condition that the free flow of water is not impeded. You also must accept the natural flow from upstream (The Land Drainage Act 1991).

If an owner fails to carry out their responsibilities, or if anyone else causes a watercourse to become blocked or obstructed, the County and District Councils have powers of enforcement by serving a notice under the Land Drainage Act. If this is ignored, the Council concerned may carry out the necessary work and then recharge the person responsible for the full cost incurred.

If there is a sewer near your site, find out who owns it.

There are two main classes of sewer:

Another situation you may face is an existing culvert/pipe already draining a rural site, connecting to the public sewer system. In many cases these will have served as land drainage outlets from agricultural land.

The rights of discharge in these cases are often difficult to establish. If an existing outfall to culvert has been used for more than 20 years, it is likely that prescriptive rights will be available to drain into that sewer, provided you maintain existing flow rates.

Whether or not you have a right to drain into third-party land, the planning authority should not use that to refuse permission at the outline planning stage because a Grampian condition can be applied for use of that land, or rights over that land.

Adjacent landowners have a statutory duty to maintain culverts on their land so their potential future failure to do so should not be relevant to permission for your site.

The right to decide whether or not to accept a discharge into a watercourse is based on land ownership. It is a trespass to discharge surface water onto the land of another person without their permission. However, if the person making the discharge has an existing right, then there should be no issues.

To determine if a development site can be drained, WHS recommends you: