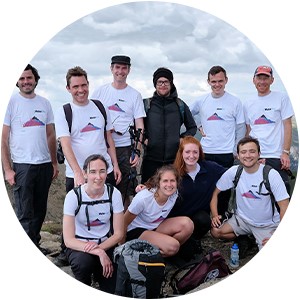 On 21 June 2019, after months of training, WHS faced the Challenge. We climbed in support of WaterAid, a mountain of a charity, who bring access to clean water for all.

No room for delays or mistakes… the clock starting ticking…

The trail started well, with beautiful views. Unfortunately, Dan’s hiking boots were not so inspiring; first one and then the other fell apart. Wallingford HikingBootSolutions (spare shoelaces keeping body and sole together) saved the day.

“Just around the corner” can seem a long time coming, but we conquered the peak between 18:35 and 19:33. The snowy summit gave us glimpses of stunning vistas before clouds gathered. Feeling the –1°C temperature, we vetoed a group photo, took a few hurried snaps, and descended speedily in the lengthening shadows of a low-angled sun.

Call it cramped. The minibus afforded little sleep, as had an unprompted police stop, and a slalom along a single-track lane with an emergency vomit break.

At the foot of the mountain our condition could have been better. Stiff-legged, we braced ourselves for the trail; a seemingly endless staircase, illuminated only by head torches flickering in the dark.

At 04:36 a stirring sunrise lit us as we pushed up the steep and gruelling path, boosting our morale.

At 05:00 a pedantic pedometer declared a daily goal of 10,000 steps had been reached, offering somewhat less comfort.

Wear and tear began to show… blisters, knee injuries… but we reached into our packs for ibuprofen. We arrived at the clear, cold summit between 05:15 and 06:03. Breathtaking views from the dawn-lit Lakes to the Isle of Man rewarded us.

This time we ‘trickled’ down to the minibus and that pot of life-giving coffee. With our eyes nervously on the clock, we pointed our nose to north Wales at 08:00. Two down, one to go, but nail-bitingly heavy traffic. A tense ride.

Ibuprofen and sugar can only do so much. This was the time to dig deep for those hidden reserves of strength. And we did.

Buoyed by a glorious day and warm sun, but battling the frustration of a rush-hour-like congestion of walkers, we knew we were close to the end, in distance and in time.

We made the summit between 14:15 and 15:03. Quick, quick… matching t-shirts… group photo and off, scurrying down to the finish line at the Cwellyn Arms.

We made it! National Three Peaks Challenge completed.

By the skin of our teeth, and pushing through pain, we all finished within the allocated 24hrs, arriving between 16:25 and 16:40 (with only a few stints of jogging). 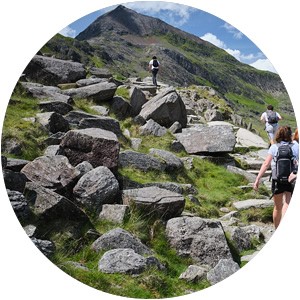 We would never have been successful without the tireless work of our driving and support team, and the meticulous organisation that went into the event.

We also thank our sponsors for donations and messages of support.

You can still help the work of WaterAid by donating at: https://www.justgiving.com/fundraising/whs-three-peaks