In April 2015, the Well-being of Future Generations Act (FGA) came into law to create a Wales that people want to live in, now and in the future. 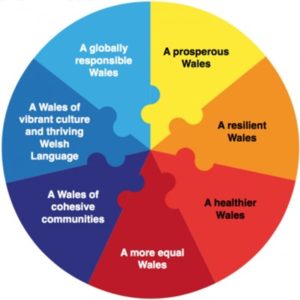 The FGA was the first legislation in the world to link with the UN Sustainable Development Goals and defined seven well-being goals for Wales.

All forty-four public bodies across Wales, including NRW and local authorities, have a statutory WellbeingDuty, to improve the social, economic, environmental and cultural wellbeing of Wales.

This does not mean just another ‘tick box’ exercise. The FGA requires public bodies to work better with people and communities, using ‘sustainable development principles’ and a joined-up approach to focus on a long-term shared vision, preventing problems before they occur.

What it means for flood risk management and water quality

Local residents questioned the perceived lack of presence of emergency services both during the event and afterwards for the clear up. Certain areas have since been dredged, and DEFRA ministers have visited the affected areas to offer ‘reassurance’, but this ‘government-led’ response has been described as reactive.

The FGA is intended to enable communities to join with government, specifically LAs and related public agencies, giving everyone a greater say in future strategies. It is hoped that this will make response to future climate impacts like flooding timelier and more efficient.

In relation to flood risk, perhaps the key way of working is prevention, closely linked to long-term thinking and planning. There are a number of opportunities to help prevent natural resource degradation and provide benefits across all seven of the well-being goals in Wales.

Thinking specifically about flood risk and water quality issues, strategies could include:

All of the above would contribute significantly to reducing the impact of climate change in the long term, and adjusting to it, and can only be addressed in an integrated way. Collaboration between a range of bodies and involvement with people living and working in the area is also crucial to ensure that proposed works can deliver intended outcomes.

How WHS can help

Project planners and managers must engage with a wide range of interested parties as early as possible during the inception stage. WHS has already worked with local authorities in Wales to incorporate FGA requirements in a range of proposals for coastal flood risk assessment and defence projects.

We anticipate that this will become ever more relevant as the impacts of climate change take hold, such as increased intensity of storm events and rising sea levels.

“Taking this approach is essential, not just because of the pressures we are under, but because it makes good sense. In Wales more than 222,000 homes are at risk of flooding and that figure is likely to increase, together with the £200 million estimated cost of putting it right.”