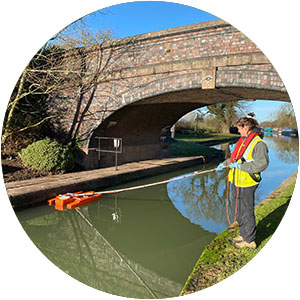 Insufficient water to meet the needs of a population, whether for domestic, agricultural or industrial use, is water stress. It is a growing issue worldwide, made worse by climate change, but canals may offer a way forward.

Water stress is a growing concern

There are two main types of water scarcity:

Added to this, the frequency of flood and drought is predicted to increase because of climate change disrupting weather patterns and causing extreme weather events.

Water stress in the UK

In the UK, the east and the south east of England are areas of serious concern in relation to water stress.

Seven water companies were identified as having a ‘serious’ issue with water stress in Environment Agency studies in both 2013 and 2021. An additional eight water companies joining the ‘serious’ category from 2021.

Water companies have been pushed to develop their infrastructure; building more reservoirs and improving the quality of existing networks to improve transfer efficiency.

Changing channels for a better picture

Water is extremely heavy. It isn’t possible to transfer useful volumes by road, rail or air. But there is another alternative, and it’s been around for hundreds of years. Canals.

Although canals were originally built to transport goods around the UK, they could also be used to transport large amounts of water over long distances very efficiently.

Just like water stored in lakes and reservoirs, canal water is not safe to drink untreated because of waterborne diseases such as Weil’s disease, but it can be treated.

Canals leak (most of them are over 200 years old and clay lined after all!) but so do pipes. The Consumer Council for Water report that England and Wales lose 3.1 billion litres of water every day from leakage.

It would not be practicable or financially viable to resurface every canal in the UK for the purpose of water transfer efficiency. Nor could they be covered to avoid water loss through evaporation.

And a further complication remains.

Canals are not simple closed systems like pipes. They have overflows and spillways to control the maximum water level along their length, preventing overtopping and flooding of surrounding areas. Canal spillways and overflows commonly connect to local river networks but can also be linked to a sewage system.

Despite the challenges, canals are worth investigating as a possible way to transfer large amounts of water.

Testing the theory on the Grand Union Canal

The Grand Union Canal (GUC) stretches 137 miles, providing a channel linking an area with a water surplus (Birmingham) to one with water stress (London).

WHS is assisting JBA Consulting in a project to better understand and model flows on the GUC. We are providing site installation, flow gauging and associated works along the canal to understand where water is lost.

Our flow gauging on the GUC is also giving us a perfect opportunity to test a new setup with an acoustic doppler current profiler (ADCP) gauging low flows. An ADCP is similar to a sonar and uses sound waves to measure water-current velocities over a depth range.

It is vital that water flows in canals are thoroughly understood. Pumping large volumes of water upstream into a canal, expecting to extract it downstream, only to lose it through overflows and spillways would not solve anything.