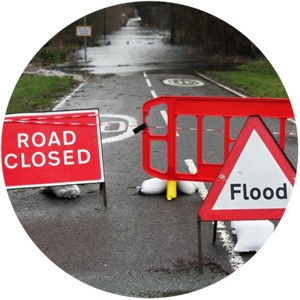 After Brexit we will move away from the EU’s Common Agricultural Policy (CAP) and landowners will be paid to produce ‘public goods’. Can this be used to help deliver flood risk management?

Why doesn’t the CAP fit?

Paying farmers based on the amount of land they manage has been seen by some as a blunt instrument for 47 years.

The CAP has been criticised for:

What are public goods?

Public goods are things that can benefit everyone but do not necessarily bring financial reward to those that produce them. They include clean air and water, greater biodiversity, improved animal welfare, public access to nature and resilience to floods or other disasters.

For example, a key risk to farming is soil erosion rates from ploughed fields, currently between 10 and 100 times greater than the rate of soil formation. The public goods system will reward farmers who use techniques that protect and improve soil quality.

How will the new system work?

The UK’s new Agriculture Bill sets out a post-Brexit system of environmental land management contracts. These will deliver public goods as defined in the UK government’s 25-year Environment Plan.

Subsidies are likely to be at about the same rate as EU payments; about £3 billion per year.

How could it affect flood risk?

Since the Somerset floods of 2014, attention has been focused on the potential benefits of better land management practice to reduce flood flows and volumes using Natural Flood Management (NFM) or Nature-Based Solutions (NBS).

Research suggests that NFM can help to reduce flooding for more frequent flood events and improve scour and water quality when implemented on a large enough scale.

But these methods are less likely to have a significant impact for more extreme events over larger areas, especially during prolonged periods of heavy rainfall as experienced during February 2020.

Our study of the potential for NFM in the Clwyd catchment found that extensive tree planting could reduce flood peaks during the summer, when trees can help utilise the available soil storage and evapotranspiration. During the winter though, when ground conditions are already saturated, the impacts were not significant.

It is difficult to justify using NFM in most flood defence schemes.

But there is potential.

The proposed changes to farming subsidies do offer a mechanism to deliver NFM as a public good, based on the wider benefits provided to society.

NFM often provides multiple benefits, well aligned with the wider biodiversity goals of the Environment Plan, such as the creation of woodland and wetland areas, and the re-introduction of natural meanders in rivers.

The devil will be in the detail.

We will be interested to see how new funding mechanisms are structured and the priority given to NFM/NBS in flood-prone areas over other public goods.