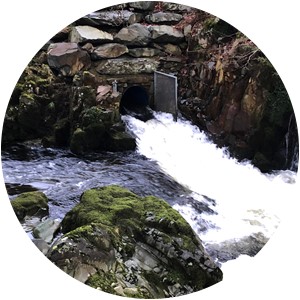 Artificial structures and modifications such as bridge crossings, culverts and dams present a major challenge to river systems globally.

They can disrupt the natural flow of water, slowing certain parts of the flow upstream and constricting and accelerating flows downstream.

Direct modifications such as river diversions and straightening can also alter flow characteristics, including reducing frictional losses at bends and shifting channels to new substrates.

Rivers and streams are not only conduits of water, but also of sediment.

Water, as it flows over the channel bed, can mobilise sediment and transport it downstream, either as bed load, suspended load or dissolved load.

The rate of sediment transport depends on the amount of sediment and the river’s discharge. Sediment is the basis of soils and landforms alike. It has ecological significance; its transport plays a key role in carrying nutrients and facilitating chemical reactions supporting a wide range of ecosystems.

Artificial effects on flow can have impact on sediment transport and the nature of physical features (geomorphology) by shifting the balance between deposition and erosion. If not properly managed they can re-distribute sediment and nutrients with potentially detrimental impacts on river ecosystems.

An example of our work

Hydroelectric power (HEP) is one example of infrastructure with direct impact on flow and sediment dynamics. HEP comprises 1.8% of the UK’s total generating capacity and this figure is expected to rise as we move increasingly to renewable energy sources.

Schemes often comprise an intake weir and an outfall structure. Weirs impound water, slowing upstream flows and increasing flow velocities immediately downstream. Outfalls can lead to an increase in flow velocity as water is discharged at an increased rate into the downstream reach.

A geomorphological survey can safeguard against these risks. This survey seeks to identify the potential impact of a HEP scheme on sediment transport processes and on the existing ecological condition of the river (or water body) in which it will be built.

A water body’s ecological condition is defined as its WFD (Water Framework Directive) status. The WFD status is based on a series of biological and chemical metrics such as dissolved oxygen and macro-invertebrates.

The surveys aimed to provide a quantitative baseline assessment of the potential impacts of the proposed HEP schemes in each of the catchments. Based on a photo survey and available data sources for each of the reaches, they included identification of:

Grain size analysis was also used to determine the sediment size distribution at different points along each of the streams.

Using this data and measurements taken of channel dimensions the critical discharge required to transport sediment was estimated.

We then calculated the frequency of sediment transport in each of the streams by comparing these discharge results with flows estimated using WHS LowFlows Enterprise software.

Finally, combining our baseline assessment with the proposed design of each of the schemes we could assess the impact of the HEP proposals at each of the sites.

The impact of the proposed works on sediment transport was likely to be negligible.

Despite this, we made several recommendations to ensure there was no chance the proposals would risk deterioration of the existing water body WFD status.

The same principles used to investigate the impact of HEP schemes on a river reach can be applied to a wide range of structures and modifications. Geomorphological surveys confirm baseline sediment dynamics and ensure that new structures are sustainable and will not result in ecological deterioration.

The prevalence of artificial structures and modifications in river systems will continue to be a major element of road, rail and power infrastructure.

Geomorphological surveys are essential to ensure that artificial structures can be built in river environments without compromising sediment transport processes and river ecosystems.