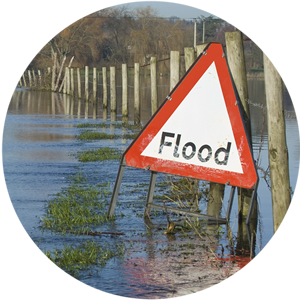 Flood warning systems aim to give at least two hours advance warning of flooding. Critical time for people to move valuables out of water’s reach and ensure safe evacuation routes.

This is easier to achieve with rivers that rise and fall relatively slowly (like the Thames) than with steeper, faster moving rivers in upland areas.

How do flood warning systems work?

The Environment Agency, Natural Resources Wales and the Scottish Environment Protection Agency all use systems to forecast floods.

Flood warnings are normally issued when a ‘trigger level’ is reached in a river.

River-level monitoring stations for example, located significantly upstream of flood warning areas, are set with trigger levels. These give advance notice of river levels approaching top of bank or at risk of overtopping defences.

Where rivers are steep and significant numbers of people and properties are at risk, flood forecasting models (FFM) are needed. These models are designed to predict when the flood warning trigger levels will be reached.

Flood forecasting models aim to predict how particular river levels will respond to a rainfall event. There are usually two components.

Flood forecasting models must be very quick to run. To do this, they have to be as simple as possible and very stable mathematically. They should also be calibrated against as many actual recorded rainfall events as possible, to provide confidence as a flood warning tool. It’s a challenging combination of requirements to achieve!

For the River Ely model we are also preparing a flood forecasting model and calibrating this against observed rainfall and flood events.

Typical flood warnings issued by the Environment agency include:

At Flood Warning level, residents should take action to move valuables to a safe place and put flood protection equipment in place if available.

These warnings can be seen online:
https://flood-warning-information.service.gov.uk/warning

Individuals and businesses can also sign up to a flood warning service. This is particularly useful for properties in a ‘flood warning area’ (an area assessed as being at risk of flooding from rivers).

People signing up for the flood warning service are sent an automated message by phone, email or text message as soon as each alert level is reached.

As I write this article, we have had moderately heavy rain across parts of the UK, with three instances of Flood Warning in river catchments in the south west of England and 14 of Flood Alert.

Is everyone in these communities thinking about moving valuables and installing flood protection equipment?