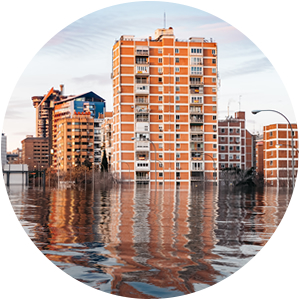 Many communities in the UK are threatened by flood risk, but some people are more disadvantaged than others.

The effects of flooding on individuals are wide ranging and include:

Flood effects also vary with the severity of flooding, and current investment in flood-risk strategies and defences is driven by physical exposure to flood risk.

But this misses a key consideration.

The social vulnerability of individuals and communities at risk determines their capacity to respond to the consequences of flooding.

Personal, social or economic circumstances significantly affect people’s vulnerability. Those most at risk include children, the elderly, ill and homeless.

For example, those with less economic security may not have insurance to cover flood damage costs, elderly individuals may be at higher risk of becoming ill after floods, and cultural differences in communities may lead to misunderstandings over flood warnings.

Social vulnerability is influenced by a range of factors including:

Areas with significant exposure to flood risk and a large number of individuals with social vulnerability are areas at most flood disadvantage. Flooding in these areas may lead to greater losses than elsewhere.

Social vulnerability needs to be taken into consideration in government funding, allocation and investment in response to flood risk.

And flood risk is increasing

The number of people exposed to flood risk in the UK is increasing due to environmental, social and policy changes.

An ageing population means more vulnerable people at risk, with greater challenges for coping and recovery after flood events.

Flood insurance in the UK is currently arranged so that premiums are higher for those living in areas at higher risk of flooding. This bias doesn’t account for individuals’ varying levels of income and poverty, and ability to cover the cost of insurance.

Poverty increases individual and community vulnerability to the impacts of floods. As flood risk increases, so too does flood disadvantage.

Is the government doing enough?

The government’s investment programme to minimise exposure to flood risk in England does not fully consider flood disadvantage.

The government does allocate 2.25 times more funding to those in the 20% most deprived areas than in the 60% least deprived areas (Targeting flood investment and policy to minimise flood disadvantage. Kit England and Katherine Knox, June 2016). However, this allocation does not mean the money is being spent directly on reducing flood risk.

Funding takes into consideration long-term investment using a cost-benefit approach, but does not address urban bias due to larger populations or the varying costs of flooding on communities and individuals.

The Netherlands is leading the way

A legal flood protection standard has been introduced in the Netherlands, which addresses economic capacity and social protection alongside cost benefit. This specifies a minimum safety level for everyone at risk of flooding.

The government needs to review their approach to flood investment to ensure that social vulnerability and deprivation are adequately addressed.