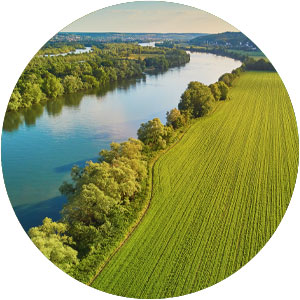 Excess levels of nutrients in watercourses can cause significant environmental damage. The regulatory environment is changing significantly to counter this, and consequences will be far-reaching for developers.

Breadth of vision – the Environment Act 2021

Almost two years after its first reading in the House of Commons, following further readings and amendments made by both houses, the Environment Act 2021 became law last November.

The Act aims to improve the natural environment in which we live, by providing a basis for environmental targets and future policy.

Its stated objectives include:

Founded in November 2021, the OEP’s main responsibility is to hold the government and other public authorities to account by scrutinising and reviewing targets, laws and enforcement actions.

Until 27 June 2022, environmental targets are under consultation for:

Targets to be achieved for water quality and availability by 2037 include:

Once these targets have been laid before parliament and set, they will be legally binding and upheld by the OEP.

As highlighted above, one area of concern in the Environment Act is the amount of nutrients in our water bodies.

Nature England is aiming for ‘nutrient neutrality’. To date, 74 local planning authorities (LPAs) which drain to vulnerable internationally designated sites are affected. Up to 120,000 new homes in England have been delayed.

Following the ‘Dutch N’ ruling of the European Court of Justice in 2018, concerning nitrogen and phosphate limits in fertilisers, Natural England published guidance on how the ruling would affect planning permission in England.

LPAs must demonstrate the environmental impact any proposed development will have in relation to increased nutrients on designated water bodies. If sites have ‘unfavourable conditions’ due to excess levels of nitrates and phosphates, then any development must demonstrate nutrient neutrality in order to avoid an objection from Natural England.

Developers must be able to show that a proposed development will not increase the levels of nitrate or phosphates entering protected watercourses.

At a time when the government is struggling to meet its manifesto pledge of building 300,000 new homes a year by the mid-2020s, many people view nutrient neutrality as a significant issue.

Deal with the problem at source
Nitrates and phosphates can be prevented from leaving development sites entirely, either by costly on-site mitigation or disposal to a sewage treatment works.

In some cases it would be possible to divert foul water to a sewage treatment works in a different waterbody catchment, which doesn’t drain to a designated site. If not, then until significant upgrades occur to our sewage treatment works, treatment would still cause an increase of nitrates and phosphates entering the protected watercourse. Passing the foul water on to another person in the same catchment doesn’t solve the problem.

Offset
It is possible for developers to purchase land currently emitting nitrates and phosphates and rewild these sites, to cancel out their development site’s impact. This simply replaces one source of nutrient pollution with another however.

Though offsetting may enable development to take place, does it truly conform to the aims and philosophy of the Environment Act to reduce pollution overall? Historically it has been a controversial fix. Any improvement in land use draining into protected watercourses that would have occurred anyway can now be sold to developers, making a net reduction in nitrates and phosphates unlikely if too much offsetting occurs.

Buy credits
Schemes that can demonstrate a reduction in nitrates and phosphates can sell the reductions to developers in the same catchment. For example, Eastleigh Borough Council currently holds 3,633 credits from 78.5 hectares of land. Each credit represents 1 kg of nitrates per year and costs £3,000 plus VAT.

Nutrient neutrality in the construction industry is important. It is also crucial to look at the sectors responsible for putting the majority of nitrates and phosphates into our water systems: agriculture and water companies.

Meanwhile, Environment Secretary George Eustice recommended colleagues to vote against an amendment that would have placed legal duties on water companies in England and Wales “to make improvements to their sewage systems and demonstrate progressive reductions in the harm caused by discharges of untreated sewage”.

It seems likely that environmental protection would be much more successful if key polluters were legally regulated and the regulations enforced. Perhaps this is an area where the Environment Act and the newly created OEP could make a difference.

As stated in the Environment Act, we need to improve the quality of our rivers, not just reduce the rate at which we pollute them. Only 14% of our waterways have ‘good ecological status’ and we can no longer continue to pump pollutants into them and expect an improvement in water quality. This means not just relying on offsetting or credit trading, but most importantly, holding water and agricultural industries to the same level of accountability as the construction industry.

On-site pollution control measures can be included in development design to limit the amount of phosphates and nitrates reaching river or groundwater systems, and we can help with this.

We can work with you to design appropriate measures for your development and get approval from the regulators.

Get in touch with Paul Blackman if you have a nutrient neutrality or water quality issue.