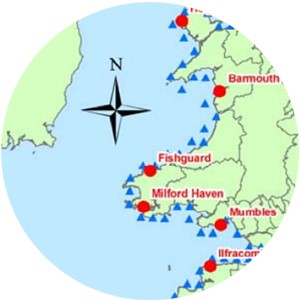 The world’s oceans are rising.

During extreme storm tides (when sea level, tide and storm surge come together) coastal property, industry and infrastructure is at particular risk. Local factors such as topography, the height of flood defences and sewer capacities can worsen the picture further.

First published in 2011, the CFB dataset is currently due for an updated release using the latest science and tide-level data.

The ESLs were interpolated between primary tide gauge sites, supplemented with model outputs from the National Oceanography Centre operational continental shelf tide-surge (CSX3) model at 12-km resolution. A higher resolution model was used to provide ESLs for the complex coastline in the north-east Irish Sea.

The model outputs were corrected to ensure: 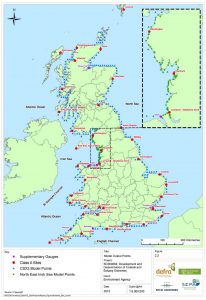 A glimpse into the future for Welsh coasts

Sea-level rises and predicted increases in storminess will increase the risks of coastal flooding in Wales as elsewhere. This is particularly significant, since the majority of large Welsh towns and cities are located on the coastal fringe.

“… consideration must be given to the impacts climate change may have on developments in areas at risk of flooding over the lifetime of the development”
Technical Advice Note 15: Development and flood risk, Welsh Government 2004

The Welsh Government, in line with TAN 15 above, has provided guidance based on epochs of mean sea-level rises, using 2008 levels as a baseline. All developments must be resilient to predicted sea-level changes over their design life. This guidance is for mean sea levels only, not extreme wave heights.

It is vitally important that a strategy for future adaptation of coastal defences and beach management is developed.

Adaptation measures not only help to reduce flood risk, they also reduce exposure by limiting development in flood-prone areas, and reduce vulnerability through improved flood forecasting and warning.

Future sea-level rise will lead to a significant increase in wave overtopping and defence failure if we do nothing. But if we continue raising flood walls, we will disconnect coastal communities and vital tourists from the sea. We need a mix of solutions, including beach management, flood warning, increased property resilience and emergency response.

A role for WHS

WHS and HR Wallingford are currently collaborating on a project under the National Procurement Service Framework to produce an Outline Business Case in accordance with Welsh Government guidelines and identify preferred options for the management of a 11km section of Conwy coastline from Llanddulas to Kinmel Bay in North Wales.

This project will use CFB data to help quantify extreme sea levels along this stretch of coastline. This will then inform coastal inundation modelling and a damage assessment for a variety of scenarios.