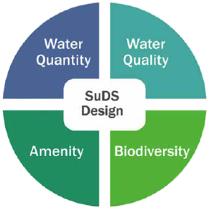 Ironically, a key challenge with sustainable drainage systems (SuDS) is still the question of who adopts and maintains them after installation.

Schedule 3 of the Flood and Water Management Act, which proposed SuDS Approving Bodies (SABs) to approve and maintain SuDS, is yet to be implemented.

The Welsh government has taken a number of positive steps to move things forward.

Speaking with local authorities in Wales, the general preference is that the SAB approach is implemented, providing clarity to all stakeholders – subject to funding of course.

Hurdles remain, but Wales is moving towards clarity.

The new requirements are based on the UKCP09 risk-based approach and have become more complex and onerous.

What the new allowances mean for development

The increase in allowance for river flows from 20% to 30% in FCAs does not seem too significant in comparison to some areas of England. It means slightly higher levels of development in Wales.

The climate change allowances will also not affect the current flood zone C1 and C2 classifications under TAN15.

However, the recommendation to consider the upper-end estimates of up to 75% is unclear. How will it be interpreted in the planning process? There is room for ambiguity and variation in approach.