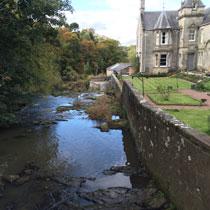 Sometimes our work is focused on a single house.

A house by a river, in a gorge.

In October 2012, the stream, the Ceres Burn, became blocked. In heavy flows, debris had gathered at a weir and footbridge, and the water flash-flooded into Dura Den.

Floodwater flowed down the C45 road running through the village and reconnected with the river via the driveway of the house. The road was deeply undercut, surrounding properties were damaged and the gable end of the house was swept away.

All this, despite a 1995 Fife Council flood alleviation scheme with raised embankments and heightened training walls designed to keep high flows contained in the burn.

After the flood, Fife Council cleared the blockage, removed the footbridge and lowered the crest of the weir.

Planning permission was sought to rebuild the house, but was denied on the grounds of SEPA concerns about the flood risk.

In Scottish Planning Policy, most development is expected to be sited outside or above the predicted 1 in 200-year flood level. Appropriate measures to reduce risk must be designed if this is not possible.

The planning permission for the Dura Den house was dependent on meeting these flood risk requirements. SEPA required a flood risk assessment (FRA) of the Ceres Burn, and a grille and drainage to the driveway of the property, to allow for the risk of future blockage and flooding.

WHS was commissioned to undertake the FRA to find a way forward.

In order to satisfy the needs of Scottish Planning Policy (2014) and the Flood Risk Management (Scotland) Act 2009:

The WHS 1D model showed that maximum water levels would be kept within the banks of the burn.

Even allowing for climate change and 1 in 200-year flows, the removal of the bridge structure that caused the blockage and alteration of the geometry of the existing weir meant that the capacity of the burn would be enough to avoid flooding.

Our FRA was submitted to Fife Council and SEPA in December 2015.

Planning permission was approved in February 2016 with no further updates required to our work. SEPA confirmed that the grille and drainage were also not required.